TB is a highly contagious infectious disease cause by the microorganism, Mycobacterium tuberculosis. According to the World Health Organization (WHO), worldwide TB kills more people annually than diarrhea + malaria + AIDS put together.

WHO estimates a prison TB rate "100 times higher than that of the civilian population".  Also, the TB incidence rate in prisons parallels that of human immunodeficiency virus (HIV) infection.  The presence of these agents in the same person at the same time is referred to as a concurrent infection.

Other recent WHO statistics...

1 Morbidity (sickness) rate has an even greater effect upon local populations due to decreased work productivity.

Mycobacteria are unusual group of microorganisms sharing properties of both bacteria & fungi. There are only two significant human pathogens infecting normally healthy people:

Mycobacteria other than tuberculosis (MOTTS) are a group of environmental organisms associated with opportunistic infections in immunocompromised patients (e.g. AIDS).  Mycobacteria marinum & Mycobacterium peregrinum are only two of several microbes making up this group. These organisms do not normally infect healthy individuals. 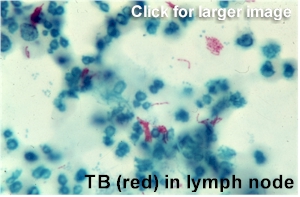 Disinfectants must list anti-mycobacterial, anti-tuberculocidal, or anti-TB (Tb) on their labels or they're no better at killing TB than is water, which doesn't hurt it.  Also, a disinfectant must remain on the surface that's being treated for the specified amount of time stated on the label.

TB spread occurs when a TB-infected person generates airborne droplets (droplet nuclei or aerosols) when a coughing, sneezing, speaking or "spitting".  These TB-containing aerosols remain suspended in air indefinitely.  TB infection occurs when an uninfected individual inhales droplet nuclei containing the bacteria and becomes established in the body.  The lungs are the primary infection site but if left unchecked by the immune response the disease can spread to other parts of the body. 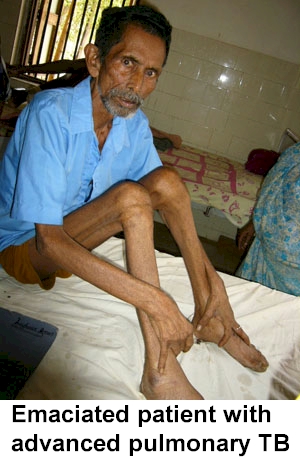 There are various symptoms that may indicate TB exposure.  These may include:

* Consumption is the old name for tuberculosis (TB), which describes how the illness wastes away or "consumes" its victims. 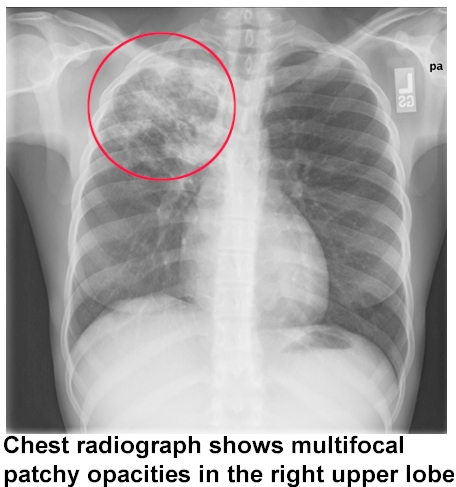 The disease can exhibit several different stages.  Disease progression depends largely on amount of TB microbe exposure and current immune system function.  Persons with competent immune system response can sometimes kill the microbe or at least contain it.  The later response is referred to as a latent infection. During latency, the living TB organisms are held within small nodular, calcified areas called tubercles, hence the name tuberculosis.  The calcium content of these nodules make them readily apparent on chest X-ray films to a competent radiologist .  Later on, the TB organisms can become "reactivated" when the immune system is sufficiently weakened by another agent or disease.  HIV and malignancies (cancers) are but two of these reactivation culprits.  Miliary TB is when the TB organisms have disseminated (spread) from the lung to other body areas (e.g., liver, brain, skin, etc.) causing further disease.

TB bacteria is much more difficult to kill than most bacteria.  Its elimination requires the use of multiple drugs for an extended period of time.  Eventually, several TB strains have become resistant to several primary (first-line) medicines used to treat it.  However, the primary reasons for TB microbes acquiring increased drug resistance are similar to those for increased bacterial antibiotic resistance.  Antituberculosis medications are either misused or mismanaged, for example:

Multidrug-resistant TB (MDR TB) have been noted for several years now.  These are TB strains that demonstrate  resistance "to at least two of the best anti-TB drugs, isoniazid and rifampicin.  These drugs are considered first-line drugs and are used to treat all persons with TB disease".  They are also less expensive than second-line drugs.

Extensively drug-resistant TB (XDR TB) is a relatively rare type of MDR TB.  "XDR TB is defined as TB that is resistant to isoniazid and rifampin, plus resistant to any fluoroquinolone and at least one of three injectable second-line drugs (i.e., amikacin, kanamycin, or capreomycin)."

A large problem with XDR TB is their resistance to first-line and second-line drugs.  This leaves patients with fewer treatment options all being much less effective.

Go to next section: Training Requirements