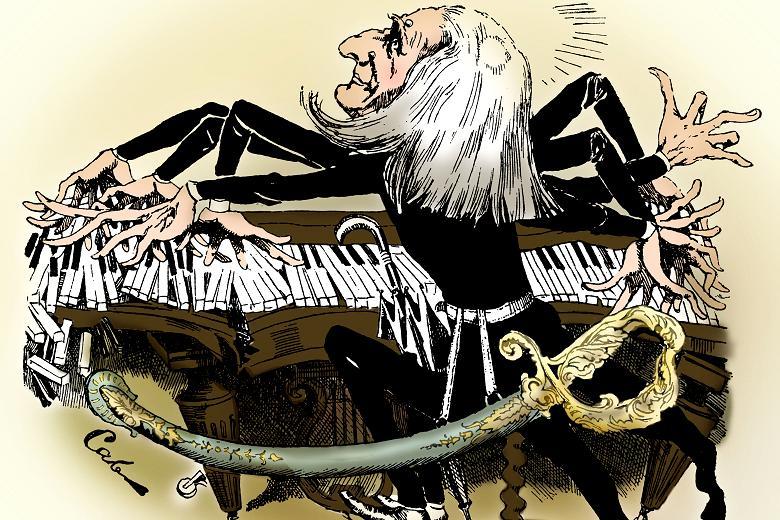 What this Piano Workshop featuring Music of Liszt and the Virtuoso is all about...

We are excited to offer this workshop to pianists age 11 through adult.  The camp will focus on the music of Liszt and the Virtuoso.  Daily classes will focus on technique, theory, form and literature.  Students will take mini-lessons and master classes with nationally renowned experts and USA piano faculty.

Students should bring 1 or 2 piano pieces to study during the workshop. Pieces by Liszt or other showy pieces are recommended but not required.

Registered students may perform at 1:00 p.m. on Friday, June 24, at the Student Recital in the Laidlaw Recital Hall.  Admission is free to the public.

Recitals by Piano Camp Faculty featuring Liszt and the Virtuoso will be given Monday through Thursday from 3:00 p.m. to 4:15 p.m. and are included in the workshop fee.

General admission tickets for faculty recitals will be sold daily at the door of the Recital Hall in the Laidlaw Performing Arts Center for $5.00.

A $30 discount will be given for students who achieved “OO” in District and for groups of siblings.

Axel Lenarduzzi, is a Professor at the Claude Debussy Conservatory of the 17th District in Paris, France. Axel Lenarduzzi began his studies at the Conservatoire d'Asnieres near Paris, winning the first prize for piano in the class of Jacqueline Durand. He continued his course of study and received the diploma of the National Conservatory of Boulogne-Billancourt and received the award from the Conservatoire National of the region of Montpellier. He went on to study at the Royal Conservatory in Brussels, completed an apprenticeship in the Salzburg Festival and studied in Rome. In Rome, He was awarded the Diplôme supérieur de perfectionnement à l’unanimité issued by the prestigious Académie nationale supérieure Santa Cecilia, and earned under the teachings of Sergio Perticaroli. Prize winner of international competitions in Italy, France and Belgium, Axel Lenarduzzi appears regularly in Italy and in France, where he has been featured in numerous festivals as soloist and collaborative musician. In 2003, Lenarduzzi and Holm performed at the International Liszt Competition in Italy. In 2006, 2008, 2012, and 2015 Lenarduzzi performed as soloist and in duo recitals with Holm throughout the United States.

Dr. Robert Holm, a Steinway Artist since 2010, is Professor of Music and head of the piano division at the University of South Alabama, and principal pianist for the Mobile Symphony Orchestra.  Holm Received a D.M.A. from University of Illinois. Holm has appeared as soloist with the Johnson City Symphony Orchestra, Alabaster (AL) Symphony, Mobile Symphony Orchestra, Mobile Youth Symphony, and Mobile Symphonic Pops. He has performed as soloist and collaborative artist at Steinway Hall in London, at Shaoxing University (China), at Carnegie (Weill) Hall, at Lakehead University (Canada) and has given solo programs extensively throughout the United States.  At South Alabama, Holm has given 52 solo recitals including sonata cycles by Mozart and Beethoven and over 250 collaborative recitals with faculty and guest artists.  In June 2019, Holm and violinist Jenny Grégoire recently performed recitals at 3 Universities in Brazil.

Michael Gurt, is the Paula Garvey Manship Distinguished Professor of Piano at Louisiana
State University. He won First Prize in the Gina Bachauer International Piano Competition in 1982, and was a prize-winner in international
competitions in Pretoria, South Africa, and Sydney, Australia. He has performed as soloist  with the Chicago Symphony, the Philadelphia Orchestra, the Utah Symphony, the Baltimore Symphony, the Memphis Symphony, the Capetown Symphony, the China National Symphony Orchestra, and the Natal Philharmonic Orchestra in Durban, South
Africa. He has made solo appearances in Alice Tully Hall and Weill Recital Hall (Carnegie Hall) in New York, Ambassador Auditorium in Los Angeles, Orchestra Hall in Detroit, City Hall in Hong Kong, the Victorian Arts Center in Melbourne, Australia, Baxter Hall in Capetown, South Africa, and the Attaturk Cultural Center in Istanbul, Turkey. Gurt serves as Piano Mentor at the National Music Festival in Chestertown, Maryland, and was the chair of the piano department at the Sewanee Summer Music Festival from 1987 through
2007. Gurt holds degrees from the University of
Michigan and the Juilliard School.

Dr. James Helton, pianist, is a Professor of Music at Ball State University, Indiana, where he teaches studio piano and coordinates the accompanying program.  He maintains an active schedule as a soloist, a collaborative performer and as an adjudicator and teacher of master classes.  He has performed throughout most of the United States and in the Czech Republic, Spain, and Thailand. He has had the pleasure of working with Pulitzer Prize winning composers George Crumb, William Bolcom, Lucas Foss and Joseph Schwantner in concerts broadcast over public radio and television.  Helton earned the Doctor of Musical Arts and Master of Music degrees in Piano Performance and Literature (cognates in musicology and piano pedagogy) from the University of Illinois at Urbana-Champaign and the Bachelor of Music degree in Piano Performance from the University of Texas at San Antonio. His principal teachers were Ian Hobson and Janice Hodges.  He has performed in master classes of John Browning,  John Perry, Ursula Oppens, Richard and John Contiguglia, Maurice Hinson, and Bela Siki, among others.