Directors of the JMB 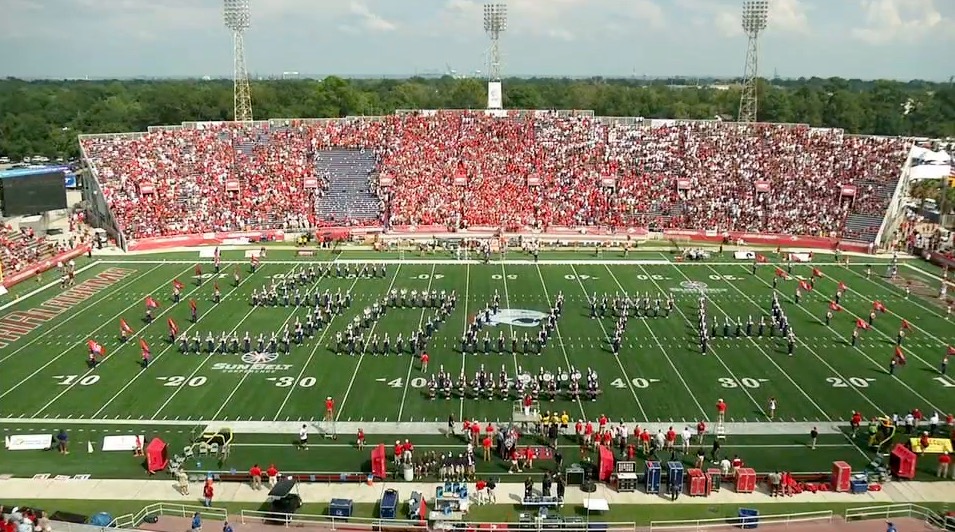 The Jaguar Marching Band's history is a short one, but it is filled with significant milestones that have positively affected the University of South Alabama, the Department of Music, and the lives of students, supporters, and alumni of USA.  While the thought of a university marching band and football team had been discussed on several occasions it was the vision of V. Gordon Moulton, the second president of the University of South Alabama, that led to the formation of the Jaguar Marching Band. Moulton's dedication to student life at USA and the pursuit of excellence throughout the university was a critical component of its growth from 1999 until 2013.  In response to a student petition in 2007 that expressed the desire for a football team and marching band, President Moulton responded and the University of South Alabama fielded its first team and band in the fall of 2009.

Critical to the success of the Jaguar Marching Band's formation was Dr. Greg L. Gruner, Chair of the Department of Music.  Dr. Gruner's vision for a marching band not only viewed the ensemble as a uniting icon for the entire campus, but also an important recruiting tool for the university and the Department of Music.  From the beginning, quality was the primary concern of Dr. Gruner, and this belief has permeated every element of the band's existence.  Dr. Ward Miller was hired in 2008 as the University of South Alabama's first ever Director of Athletic Bands in 2008.  Under Dr. Miller's guidance, the first Jaguar Marching Band took to the field in fall of 2009 with over 140 members.  The first-ever Drum Major and Feature Twirler of the Jaguar Marching Band, Mr. Cody Salter and Ms. Melissa DiCesare, served admirably and continued their positions for four full seasons. Following an extremely successful inaugural season the band's membership grew to 170 members in the second season and 190 members in its third season.

In the JMB's fourth season, membership grew to nearly 230 members and the ensemble welcomed its first Assistant Director of Bands, Dr. William Petersen.  In addition, the Jaguar Marching Band welcomed their second Drum Major in its short history, Ms. Rebecca Mitchell. The 2012 season featured the JMB's first performance at an SEC stadium as well as the band traveling to New Orleans for their first halftime performance at an NFL game for the New Orleans Saints.

The Jaguar Marching Band had a banner year in 2014, including performances at Governor Robert Bentley's 2015 Inauguration as well as the band's first bowl game performance at the inaugural 2014 Raycom Media Camellia Bowl.  In addition, the JMB welcomed over 500 students at the 2014 Jaguar Marching Honor Band, the largest attendance at the event since its inception.

The Jaguar Marching Band welcomed its third Drum Major for the 2015 season, Ms. Carson Watson, after an exhaustive audition process.  She replaced Ms. Rebecca Mitchell, who served as Drum Major for three season. The JMB highlighted their year with an exhibition performance at the Atlanta Bands of America Super Regional.

September 10, 2016 marked the unveiling of the JMB's new uniforms, the first new uniform since the band's inception.  In 2020 the JMB unveiled an updated short-sleeve uniform design for the summer months that debuted during the 2021 football season.  2020 also saw the opening of the state-of-the-art Hancock Whitney Stadium on USA's campus.  The 26,000 person stadium is now one of the centerpieces of campus and served as the host venue for the 2021 South Alabama Marching Band Championships.

The Jaguar Marching Band currently is 250 members strong and performs at a wide variety of events on campus, as well as throughout the Mobile community and the Gulf Coast.  Membership is by audition and students are provided with university owned instruments, custom rehearsal space, a dedicated practice field with lighting, as well as a comprehensive faculty and staff.  The JMB is continually evolving and growing along with Jaguar Football and the band has gained a reputation for excellence in their musicianship and marching.  The band is under the direction of Dr. Will Petersen, Director of Bands at the University of South Alabama.