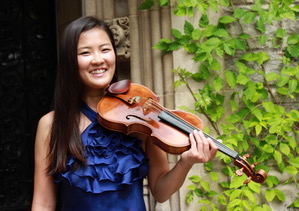 American Canadian violinist Grace Kim is an active orchestral, solo, collaborative and teaching artist. In addition to her position at University of South Alabama, Grace is Principal Second of both the Pensacola Symphony Orchestra and Pensacola Opera, acting Assistant Principal Second with the Mobile Symphony Orchestra, and a core member of the Sinfonia Gulf Coast Orchestra. At South Alabama, Grace teaches applied lessons, String Ensemble, String Orchestra and String Methods among her responsibilities.

As an orchestral musician, she has made several appearances as Guest Concertmaster and performed Schindler’s List as soloist with the Pensacola Symphony Orchestra. She has formerly played with the Charleston Symphony Orchestra and Kitchener-Waterloo Symphony Orchestra in Canada.  She has worked under the baton of Herbert Blomstedt, Fabio Luisi, and Giancarlo Guerrero. Her summer festivals have brought her to Moritzburg Festival Academy (Germany) and Pacific Music Festival (Japan). She has premiered an original composition by Elliot Bark as a soloist in California.

Grace’s passion for teaching has led her to serve with several non-profit organizations across the nation.  She works as a Violin Teaching Artist with Atlanta Music Project (GA), Pensacola Community Music School (FL), and Porterville Strings (CA). In the past, she has taught for Franklin Pond (GA), and Northwest Florida State College (FL). Grace has studied and worked with renowned pedagogue Mimi Zweig and has taught for the Indiana University String Academy (IN).

As a chamber musician, Grace has appeared across the US, Canada, Europe, and Japan with different groups. These included performances with the Harlem Quartet, Imani Winds, and as a former member of the internationally touring group known as the Petar Jankovic Ensemble performing Spanish and Latin American Music across the US, Serbia, and Slovenia.

Grace received her B.M. and M.M. with Mauricio Fuks and Kevork Mardirossian at Indiana University. She lives in Pensacola with her husband Asher Kelly and their Australian Shepherd, Reya. She proudly plays on a Ted Skreko violin.