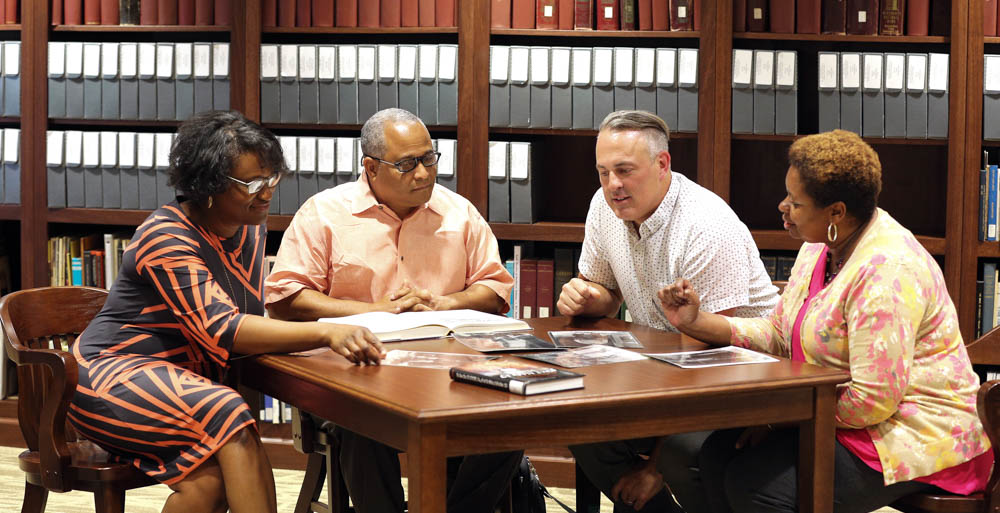 The life and legacy of Clotilda survivors of Africatown will be included in the first feature documentary film with the collaborative efforts of faculty from the University of South Alabama and Spring Hill College. Discussing resources for the documentary are, from left, Dr. Joel’ Lewis Billingsley, producer; Dr. Kern Jackson, co-producer; Ryan Noble, director; and Dr. Pamela R. Moore, co-producer.

Faculty from the University of South Alabama and Spring Hill College are collaborating on producing the first feature documentary film about Africatown, the historic community founded by enslaved people in the Plateau area of Mobile. Filming has been underway for nearly one year.

“110: The Last Enslaved Africans Brought to America,” is the working title for the film about the 110 enslaved people who were survivors of the slave ship Clotilda who were brought from West Africa to Mobile Bay. Dr. Joél Lewis Billingsley, associate professor of counseling and instructional sciences in the College of Education and Professional Studies at South Alabama, is a sixth-generation descendant of Cudjo Lewis, who was the last known survivor of the Clotilda. She is a producer on the film project that will have several components including the documentary, an oral history, an art exhibit, K-12 curriculum and a book of poetry.

“This documentary is focusing on the legacy of the 110,” she noted. “Their story is heroic and inspirational. It amazes me how they were able to create a community of their own when they realized they could not return to their homeland. We are grateful to be able to tell this story on the screen.”

“Their story is heroic and inspirational.”

The enslaved were distributed to several slave owners in south Alabama where they endured traumatic experiences. Following the Civil War, the former slaves reunited and realized they were able to create their own community, which came to be called Africatown. They kept their traditions, culture and their way of life, including their language.

The documentary film will also feature details about Timothy Meaher, who owned the Clotilda and commissioned the excursion, and William Foster, who captained the ship after it was illegal to participate in the international slave trade in the United States. It was prohibited in 1807.

Ryan Noble, assistant professor at Spring Hill College and a filmmaker, met and worked with Lewis Billingsley when she and former USA colleague Dr. Robert Gray produced “Mobile in Black and White,” which centered on issues of racial justice and created community conversations on race in the Mobile area. Since then, they have worked on numerous short film projects. Noble is serving as director of the Africatown documentary film. Gray will manage the poetry production of this project.

“Africatown is unique and it’s an international story that needs to be preserved,” Noble said. “Our main goal for the documentary is to advocate for cultural history and to share its value with others. And, we are working to secure additional funding to complete the film and support the resources needed to promote the film. We are doing important work, and I knew that we needed to tell this story through film. I am pleased to contribute to this project.”

Dr. Kern Jackson, assistant professor of English and director of African American Studies at South Alabama, is serving as co-producer and working on the oral history part of the story.

“Projects such as this one about kidnapped Africans and their descendants serve a disproportionate and important role in the very difficult process of maintaining stable race relations,” explained Jackson. “The active destruction by these folks of enslavement and its legacy is an ongoing process, but necessary for a more fully recognized democracy.”

“Projects such as this one about kidnapped Africans and their descendants serve a disproportionate and important role in the very difficult process of maintaining stable race relations.”

One of the key pieces of this project will include a curriculum that will be presented to the Alabama Department of Education to be considered for classroom study.

The Africatown documentary film will move into phase two of editing and production and will be screened at film festivals in 2019. Once ready to release for public viewing, the film will also be viewed on the South Alabama and Spring Hill campuses and other locations around the state.

The production team also has the support of Sylviane A. Diouf, an award-winning historian of the dispersion of Africans from their homeland and author of the book, “Slavery’s Exiles: The Story of the American Maroons.” Diouf is serving as a resource for the documentary.

The history of Africatown is unique and it’s been an emotional, yet rewarding journey for Lewis Billingsley.

“Together, the expertise of each team member will contribute to the success of this film project,” she said. “I am learning about myself and my history. And, collectively, how we can learn more about this history and value it as a part of American history."