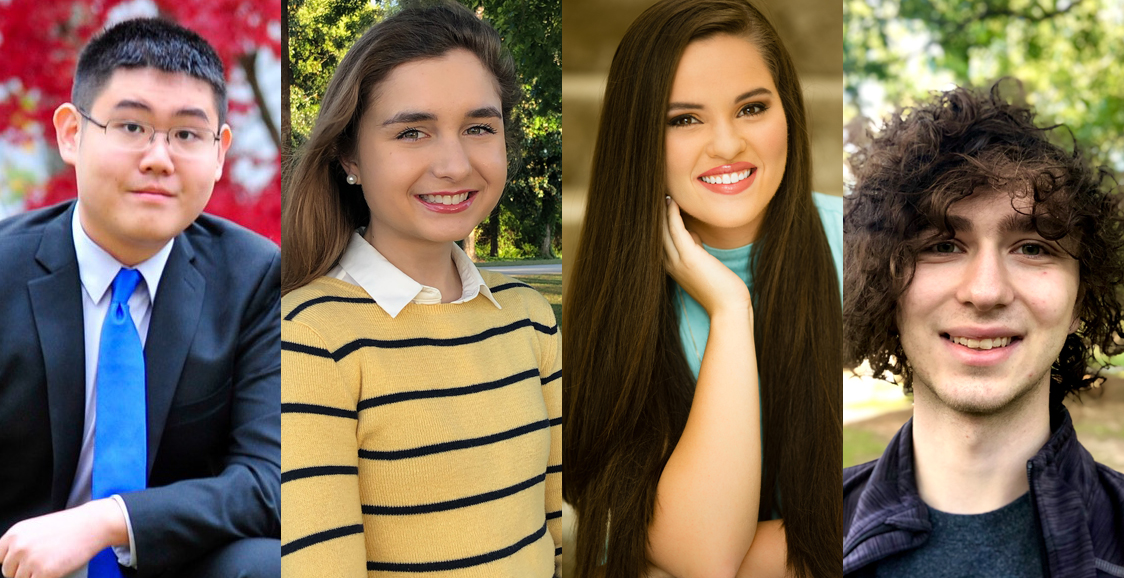 University of South Alabama undergraduate students Richard Fu, Hannah Giannini, Samantha Michlowitz and John Pomerat are among 396 students from across the country who have been named to the 2020 class of Goldwater Scholars, a national competition that recognizes outstanding achievement in science, technology, engineering and mathematics.

"The Goldwater Scholarship Program supports undergraduates who show exceptional promise of becoming this nation’s next generation of research leaders in the STEM fields,” said Dr. Wesley Terwey, faculty committee chair for the USA Goldwater Scholarship Committee and assistant professor of meteorology. “The 2020 class places the total number of scholars since 1986 from the University at 12, with this year being the first in South’s history to have all four nominees be named Goldwater Scholars. In the past, we would have been happy to announce one of the four nominees has received the scholarship. This is an exceptional year.”

According to the Goldwater Scholars program, this year’s national class was selected from 1,343 natural science, engineering and mathematics students who were nominated by 461 academic institutions.

“Having all four nominees from South be recognized as Goldwater Scholars is unprecedented for the University,” said Dr. David Forbes, scholarship/fellowship coordinator and professor of chemistry. “This is a fantastic testament to the students, mentors, and the Honors curriculum. Notable as well is the sophomore cohort representing South’s awardees, which historically represents 20 percent of those recognized nationally.”

This year’s Goldwater Scholarship Recipients are:

“Receiving the Goldwater Scholarship is an incredible feeling” Fu said. “I am overjoyed to know four of us are receiving this recognition. I thought only one of us would have been selected. I was amazed that we all were selected. This is a fantastic opportunity.”

Fu aspires to become a physician specializing in cardiology. Over the past year, he has spent time doing research with his mentors in oncology by conducting translational research in personalized medicine for cancer patients at the Mitchell Cancer Institute.

“Preparing for the Goldwater Scholarship process has been an awesome experience,” Giannini said. “I am honored to be selected. There’s a great sense of community at South. My mentors and faculty advisors have been very supportive throughout this entire process. I could not have received this award without their support.”

Giannini plans to become a medical physician and earn her Ph.D. in biochemistry and molecular genetics. She started doing research at the Mitchell Cancer Institute her freshman year. Her research focus has been on novel molecular pathways involved in carcinogenesis. She was first introduced to research while in high school.

“When I got the call that all four of us were selected, ‘I said no way.’ We had so much support from our mentors and faculty,” Michlowitz said.  “I feel extremely honored to have been selected as a Goldwater Scholar. The application process was long, and I am so glad my dedication has paid off. This is amazing.”

Michlowitz plans to earn her doctorate in meteorology and physical oceanography. She started conducting research as a junior in high school at the Mitchell Cancer Institute. She continued her research as a freshman at South with a focus on tropical meteorology for the NOAA Hurricane Research Division.

“I was surprised that I was selected as a recipient because the process was very competitive this year. I came to South interested in research and pursued professors who I could do research with,” Pomerat said. “I am honored by the recognition of the Goldwater Scholarship, but none of this would have been possible without my mentors, who encouraged me to apply and were very supportive during the entire process”