Connecting Math, Science and a Paycheck 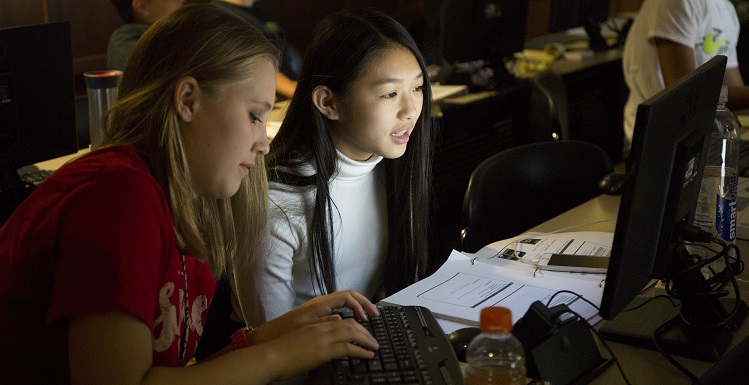 Emily Martin, left, and TuAnh Cao, work on encryption assignments during GenCyber Camp held at USA's School of Computing. They and other rising 9th graders at Davidson High School participated in the week-long program.

Inside a darkened classroom at the University of South Alabama, 49 high school students and several teachers peered at bright computer screens, focusing on coding, cryptography, malware and digital forensics.

For the second straight year, the National Security Agency and the National Science Foundation funded the USA School of Computing’s GenCyber Camp, one of 133 held nationwide. USA's camp introduces rising 9th graders, generally ages 13-14, to the potential of cyber security as a career and shares the latest methods for teaching cyber security to their teachers. All participants in this week’s camp were from Davidson High School in Mobile.

“This group is Davidson’s cream of the crop, and they have competed hard for this camp,” explained Dr. Todd Andel, professor of computing. “The NSA is trying to spark interest in cyber security at a young age because there is a tremendous need in both the private and government workforces. It’s a great career choice with excellent potential. The NSA also aims to increase diversity with these camps.”

According to 2015 statistics from the U.S. Department of Labor, cyber security graduates with a bachelor’s degree earned a median salary of $90,120. Also, job prospects for security analysts are expected to increase faster than average through 2024.

Andel said exercises during the week have helped the students make the connection between math and computing, an important step for their futures, especially if they choose cyber security.

“We’ve experienced things in this camp we would have had no other way to know, like hacking,” said Paige Love, 14. She said the camp did open up the possibility of cyber security as a career choice.

Most students said learning about hacking was one of their favorite parts of the camp. However, Andel noted the hacking portion of the curriculum was only positive.

“It’s all part of learning about cyber security,” Andel said. “I don’t think the Pentagon has anything to worry about from this group now.”

Even though Emily Martin, 14, wants to become an FBI agent, she praised the camp for how it helped her.

“As an FBI agent, I’ll need to understand computers and cyber security because someone on my team will be a computer specialist,” Martin said.

“During the first hour of the first day, they all dived into coding, really embracing it, and I think it sparked an interest in a lot of them, and they may take it further,” Bondora said. “This camp has been great for all of us.”