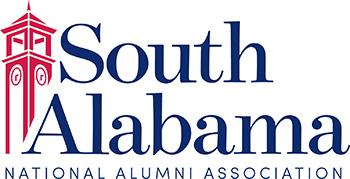 The USA National Alumni Association honored five individuals and USA Health for their outstanding accomplishments during the 17th annual Distinguished Alumni and Service Awards gala in March at the MacQueen Alumni Center. “After a year’s hiatus due to the pandemic, we are delighted to have the opportunity to recognize the achievements of our alumni and friends,” said Margaret Sullivan, vice president for development and alumni relations. “These individuals have shown outstanding leadership in their respective careers, to the University and in their communities. 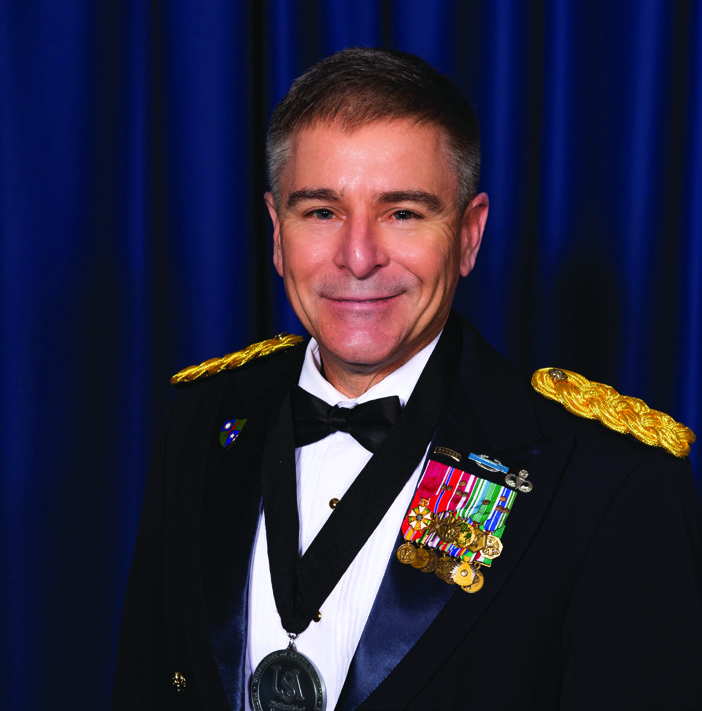 A Mobile native, Maj. Gen. Joseph Hartman graduated from the University of South Alabama in 1989 with a bachelor’s degree in political science.

Following graduation, Hartman entered active military duty as a second lieutenant and has served as infantryman, military intelligence officer and a cyberspace officer during his career.

Hartman’s service has taken him to assignments in Liberia, Albania, Zaire, the Balkans, Turkey, South Korea and Afghanistan.

He holds a Master of Military Art and Science from Air University and the U.S. Army Command and General Staff College. Hartman has received numerous awards including the Legion of Merit, the Bronze Star, the Meritorious Service Medal, the Joint Commission Medal, the Army Commendation Medal and the Army Achievement Medal.

In 2018, Hartman was inducted into the McGill-Toolen Catholic High School Hall of Fame. Hartman and his wife, Kathryn ’91, have two children, Isabel and Joseph. They reside in McLean, Virginia. 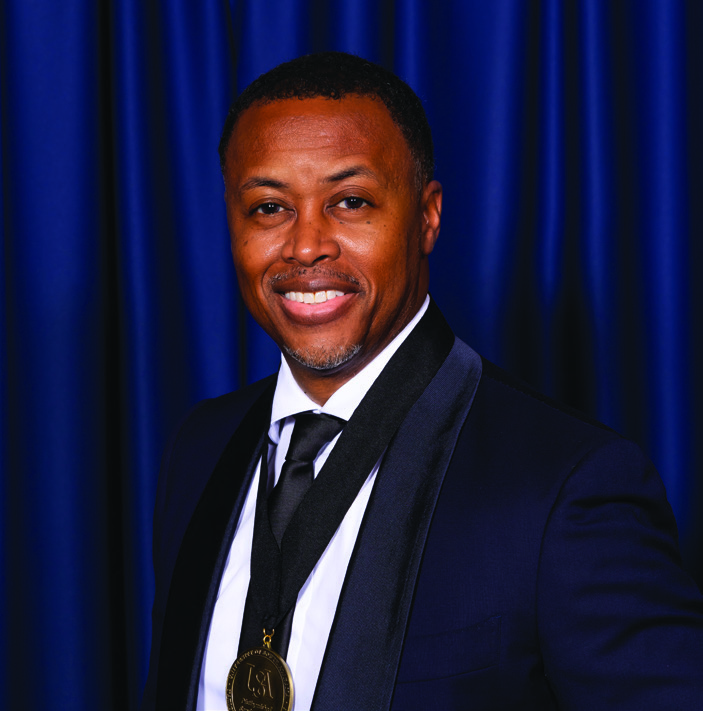 As the son of a master sergeant in the U.S. Air Force, Clyde Higgs grew up in locations ranging from North Carolina and Mississippi to California and Madrid, Spain.

After graduating from Ocean Springs High School, Higgs chose the University of South Alabama and earned a Bachelor of Arts in psychology in 1997. At South, Higgs was an active member of Kappa Alpha Psi Fraternity Inc. and served as a Student Government Association senator.

He went on to complete a master’s in public administration from East Carolina University and secured the prestigious James E. Webb Internship for Minority Graduate Students at the Smithsonian.

In 2015, Higgs accepted the position of chief operating officer for Atlanta BeltLine Inc., the 22-mile trail that links 45 neighborhoods across the city with multi-use trails, parks and a modern streetcar along a historic rail corridor. After four years in that role, he was named the organization’s chief executive officer and president.

When the BeltLine is completed in 2030, it is expected to have generated 30,000 new full-time jobs and 5,600 affordable workforce housing units within walking distance of the urban land use development project. 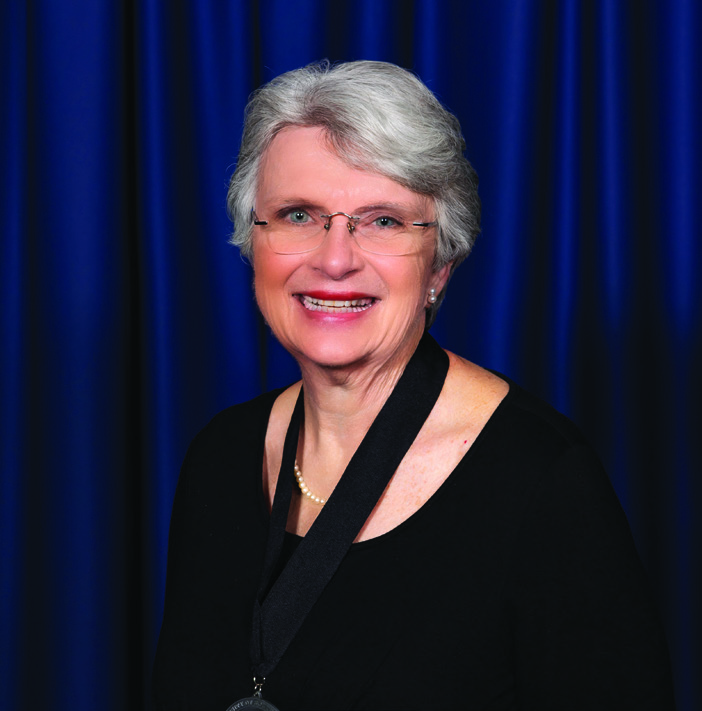 Peek began her 46-year career in education as a teacher at Alba School in Bayou La Batre. Over the years she served as principal, assistant superintendent and deputy superintendent before being named superintendent of the Mobile County Public School System in 2012. Peek was the first female to hold this position in the school system’s 180-year history.

In addition to her extensive education career, Peek has served as a volunteer leader in the community, serving on the boards of United Way of Southwest Alabama, Junior Achievement of Mobile and as a representative on the American Heart Association’s National Superintendent Roundtable.

Peek is a graduate of Leadership Alabama’s Class of XXVI and, in 2015, AL.com named her one of the Women Who Shape the State, which is awarded annually to individuals who are affecting position change in their neighborhoods, communities, regions and beyond.

During her tenure as superintendent, Peek established a leadership roundtable and signature academy councils that linked businesses, industry and higher education with the Mobile County Public Schools to inform curriculum design and support the development of student career pathways.

Peek and her husband, Tyler ’76, live in Bayou La Batre. 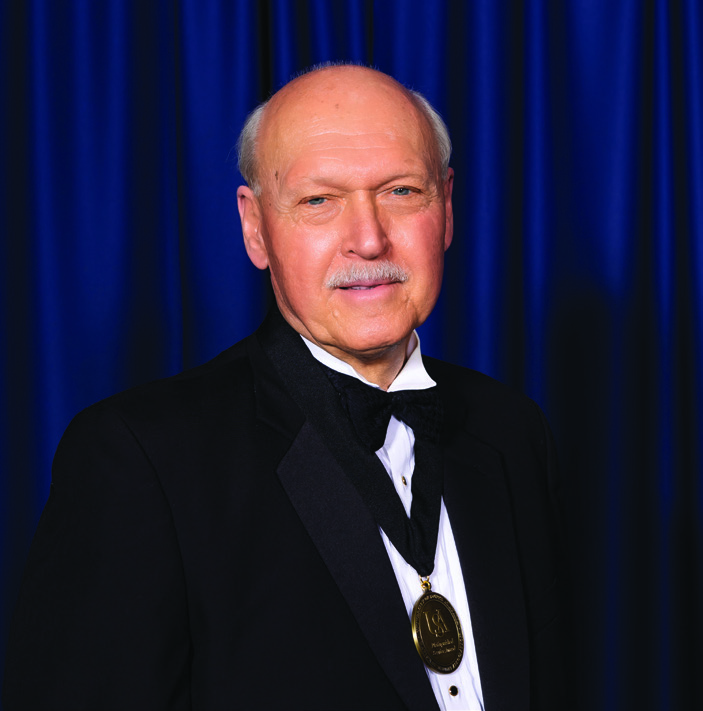 The Honorable Harvey “Les” Barnett Jr. graduated from the University of South Alabama in 1974 with a Bachelor of Arts in history.

While a student at South, Barnett participated in the Model United Nations and served as attorney general in the Student Government Association.

In 1988 Barnett co-founded Omniphone, a telecommunications equipment design and manufacturing company, where he served as president and CEO until he retired in 2008. Three years later, in 2011, Barnett accepted a position of director of the Center for Forensics, Information Technology and Security (CFITS) within the University of South Alabama’s School of Computing.

For more than a decade he has dedicated his career to advancing STEM education for both higher and secondary school students. Barnett developed the CFITS Partner School Program that offers cyber-focused K-12 STEM programs through the Hands-on Learning Lab (HOLLA) and summer camps, serving more than 6,000 students annually.

In addition to his professional achievements, Barnett is active in public service. In 2007, and again in 2014, he was appointed to the Alabama Educational Television Commission for Alabama Public Television, where he will serve until 2023. Barnett is a member of the Industry Advisory Board for Baker High School, Mary G. Montgomery High School, Davidson High School and Vigor High School.

In 2012, Barnett was elected as a United States presidential elector from Alabama and currently serves as First Congressional District chair. 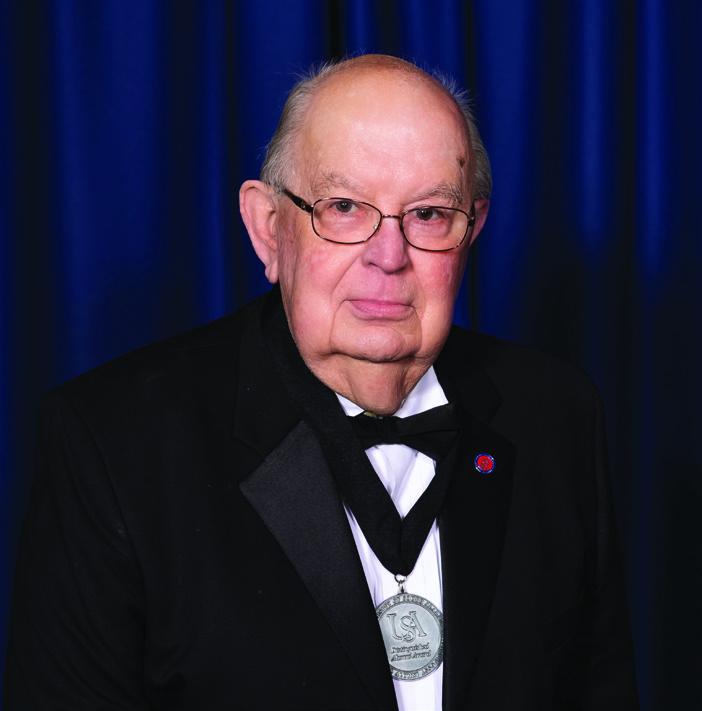 Dr. Carl Moore began his 43-year career at the University of South Alabama in 1971 where he served in many roles, including 25 years as dean of the Mitchell College of Business.

The Mitchell College of Business experienced significant growth during Moore’s tenure. Under his leadership, the college achieved AACSB accreditation — the longest-standing, most recognized form of specialized accreditation an institution and its business programs can earn.

Moore was instrumental in establishing the Alabama Banking School in the Mitchell College of Business, as well as creating the Mitchell Learning Resource Center, the Melton Center for Entrepreneurship and the Financial Analysis Center.

Working with the Mitchell family, Moore helped establish the Mitchell Scholars Program, which offers elite business students the opportunity to develop to their full potential.

During his time as dean, Moore spearheaded efforts to establish the MBA and doctorate programs in the Mitchell College of Business. 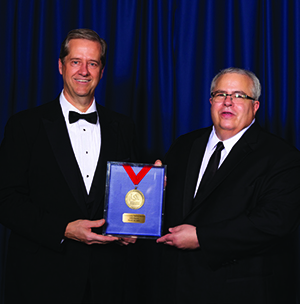 Beginning with the founding of the USA College of Medicine in 1973, USA Health is the only academic medical center along the upper Gulf Coast.

It provides excellent healthcare to the region's diverse population at USA Health University Hospital and the renowned USA Health Children's & Women's hospital, one of only five freestanding hospitals in the country dedicated to the healthcare of children and women. Continuous research and technological advancements keep USA Health Mitchell Cancer Institute at the forefront of cancer treatment and outcomes.

USA Health employs 3,900 clinical and nonclinical staff members, including some 180 academic physicians who serve dual roles treating patients and teaching the next generation of medical doctors.

As an academic medical center, USA Health offers unique innovations brought about by its extensive research capabilities and education programs. This includes clinical trials and new treatments to residency programs and other opportunities for educating young medical professionals.

At the onset of the COVID-19 pandemic, USA Health partnered with the City of Mobile to establish a drive-thru testing center and provide testing at local nursing homes, correctional facilities, as well as for the entire Mobile community. Since the health crisis began in 2020, USA Health has administered more than 116,000 COVID-19 tests and provided 106,000 vaccines to the citizens of Mobile.