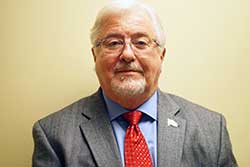 Rich is married to Cherie Randall for 39 years. They have one daughter, Stephanie, who is married to Nathan Parsons, and one grandchild, Zoey Rose. The Randalls attend Trinity United Methodist Church in Gulfport, Mississippi. 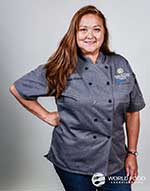 Baltimore native Jackie Seavey holds the esteemed position of Executive Sous Chef at the Island View Casino Resort since the 2006 grand opening of Gulfport’s only casino resort, but she has worked the Mississippi Gulf Coast gaming F&B industry since her return to the area in 2003.

With a background in accounting and a diverse culinary career spanning over two decades, Chef Jackie assists the Executive Chef in overseeing and managing all aspects of kitchen operations for multiple restaurants and food outlets ranging from casual to fine coastal dining, a 500-seat buffet, banquet departments, coffee and confection shops, and special event catering. Chef Jackie has been featured in local commercials and magazines; several televised cooking segments and programs; and she is sometimes the featured demo chef for large group cooking classes.

Inspired by local, regional, and international cuisines, Chef Jackie’s grandmother and Thai mother heavily influenced her passion for cooking at a very young age. After a brief career in accounting, she attended culinary school in Baltimore in 1998 while serving a simultaneous two year culinary externship in a classical French restaurant. She graduated in 2000 while raising two young children and working full time. She continued working in Baltimore area restaurants until moving to the Mississippi Gulf Coast in 2003.

She is committed to sharing her knowledge through mentoring programs and assisting career-related organizations, serving two terms as chapter president and two terms as board chairman for the Mississippi Gulf Coast chapter of the American Culinary Federation (MGCCAFC). She was awarded the MGCCACF Chef of the Year award in 2008 & 2011 for organizing several culinary competitions as fundraisers for the organization.

Chef Jackie believes in honing her cooking skills by actively participating in food sport competitions. In the past, she has won many medals participating in ACF south east regional competitions in categories including poultry, bread, dessert, and others. She won the World Food Championships (WFC) world open chili championship in Orange Beach, AL in 2018 that qualified her to compete against nine other category champions at the Final Table showdown in New Orleans in May 2019, where she won the title of World Food Champion, the prize purse of $ 100,000.00, and had her winning dish placed on Antoine’s menu (the oldest restaurant in the French Quarter). Chef Jackie continues to compete in the World Food Championships annually. In October 2019, she recently placed in the chili top 10 in Dallas, TX qualifying her to return in 2020 for another competition season. 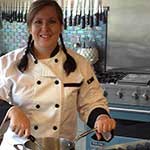 Chef Danie has been a chef in this area for the past twenty years. She started her first restaurant in the small town of Vancleave, MS with one thousand dollars and the dream to have the best Italian restaurant in the area. Pappa Roni’s was the name of the restaurant and it enjoyed great success in the same location for fourteen years drawing a following from across the coast. People drove from as far as
Diamondhead to enjoy fresh made Italian food. Chef Danie has a passion for fresh local seasonal ingredients and has always made everything in house. From the salad dressings to the fresh-made pasta everything has been a labor of love.

In 2009 Chef Danie opened her second restaurant in Ocean Springs, MS called Capone’s Italian Ristorante. This restaurant was in Ocean Springs for two years before making the move to D’Iberville, Ms to be in a higher traffic location.

In 2012 Chef Danie reopened Capone’s in D’Iberville, MS. The restaurant has enjoyed great success in this location but was closed in 2014 for Chef Danie to pursue other avenues such as catering and teaching. In 2014 Chef Danie opened LUNCH in Biloxi which is her first quick-service restaurant serving fresh local food.

Chef Danie has built a strong culinary team around her,  some of whom have been there for many years including her son Chef Ferrill who has worked alongside Chef Danie for most of his life becoming her right hand and managing most aspects of the restaurant along with her.